There are also relic hits available, including memorabilia choices for the base, legends and rookies.

Where the 2018-19 Upper Deck Premier Hockey checklist really takes off is with the signed rookie content. Collectors should find at least one Acetate Rookie Auto Patch card per box. These come as Tier 1 (#/249) and Tier 2 (#/99) versions, with Gold Spectrum (#/99 or #/25) and Platinum Blue (1/1) parallels. For rookie players without an autograph, there are Non-Auto Tier 2 cards, which are numbered to 99, and one-of-one Platinum Blue editions. 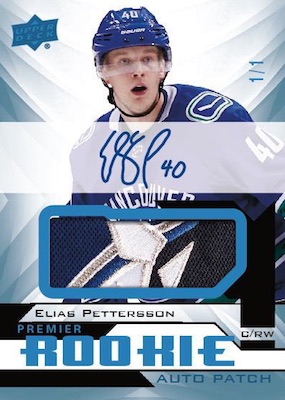 As for the other rookie inserts, 2003-04 Retro Rookie Auto Patch and 2003-04 Rookie Retro Signatures cards revisit the earlier design with only 99 copies apiece.

The Premier Attractions Rookie Auto Patch set is another one that is limited to 99 per player. These also have Non-Auto (#/25) versions. 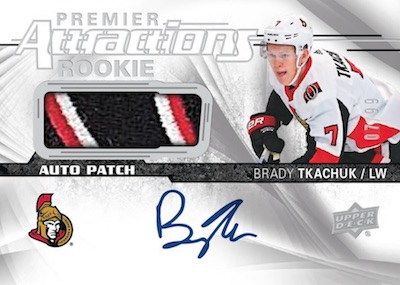 That still leaves a few more sets in the 2018-19 Upper Deck Premier Hockey checklist. When it comes to the second autograph per box, half of these are numbered to 99 or less. Collectors can track down numbered Inked Script, Signature Award Winners or Signature Champions. 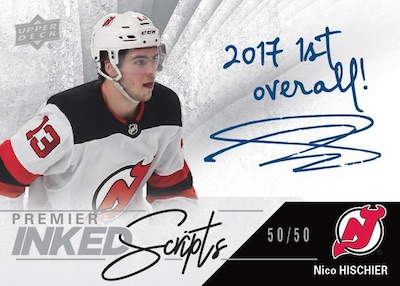 There are also Premier Signatures cards at 1:4 packs, and Premier Attractions Veteran Auto Patch cards, numbered to 99 or 25. 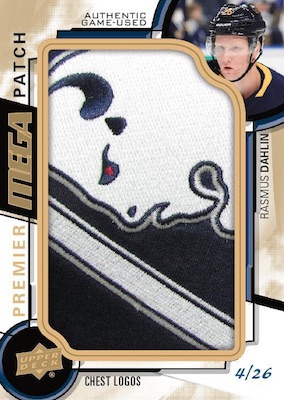 Breaking down the memorabilia variety even more, 20% of the relics are Premium Material cards. Of these premium options, 35% are Mega Patch cards and 60% are numbered to 25 or less. And approximately 60% of the autographs have an oversized swatch, as well.